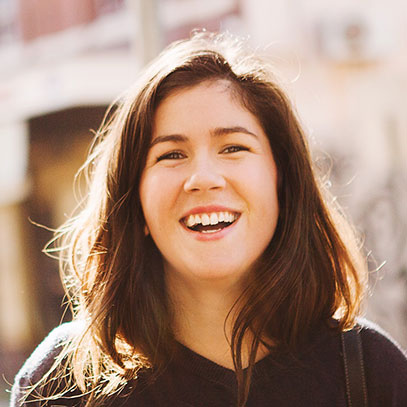 Writer, performer, rat and prolific tweeter. Becky Lucas is one of most exciting new voices on the Australian comedy scene and is quickly commanding attention.

She was a National RAW Comedy finalist in 2013 and was hand picked for prestigious Melbourne International Comedy Festivals’ The Comedy Zone showcase in 2014. In that same year Becky also opened for Wil Anderson and performed at Splendour In The Grass. She has opened for US stars Beth Stelling and Little Esther, written for Josh Thomas‘s Emmy nominated hit show Please Like Me and was named as one of Buzzfeed‘s 27 funniest Australian comedians on Twitter.

2015 saw Becky perform her debut solo show “Hightide” to sell out crowds and rave reviews in Sydney and Melbourne and join Triple J as a regular guest with her own weekly segment, “What’s Cool” on Drive with Veronica and Lewis.

In 2016 she has performed her second solo hour of stand up, “Baby”, to sell out crowds around the country as well as make her stand up television debut on ABC for The Melbourne International Comedy Festival’s “Comedy Up Late”. She was also invited to perform on Comedy Central Australia’s debut sell out live show “An Evening With The Workaholics” and asked to perform as part of New Zealand International Comedy Festival’s “Breakout” show which features the 4 hottest overseas rising stars.

The show will be hosted by Andrew Bensley, with supporting sets from Emo Parsonson, Chris Ryan and Phill Carruthers.