Comedy ACT is the place to go to find out what’s happening in the Canberra stand-up comedy scene.

It is run by the Canberra comedy community in the form of local comedians and show producers, and has been active since 2009.

The website was initially set up at the instigation of a group of local comedians around 2009. This coincided with a time of increased professionalism and activity in the Canberra comedy scene, with many of these acts touring and performing regularly at corporate events, as well as the setting up of Comedy Club at The Civic Pub which ushered in a new era for comedy in Canberra.

Looking to book a comedian for your next event function? Corporate gig? Christmas Party? Bucks night? Sure we can do that.

Comedians, like regular people, have a great range of personalities and characters. Simply Contact Us and we’ll help you find a comedian with with right character for your next event.

New on the local comedy scene? Looking to build some cred? Make friends? Build your skills?

ComedyACT is run by comedians for comedians. Comedians involved with Comedy ACT are from all walks of life and at all levels of experience, from fresh comedy newbies to well-seasoned stand-up pros.

Comedy ACT is just a grass-roots collective of like-minded individuals working together, and as such, there are no membership fees or other formalities involved in becoming a part of Comedy ACT.

Getting involved gets you in touch with other comedians who can provide valuable feedback, mentorship and help build your confidence and experience, all while strengthening the comedy community in Canberra.

We’re always open to newcomers and out-of-towners and out-of-practicers, and are always on the hunt for volunteers to help out with comedy gigs in a variety of ways including on-the-door and photography.

If this sounds like something you’re into, don’t be shy – drop us a line and join our community via the Contact Us page, or chat to the door-person, MC or the sound guy at our next gig.

Canberra’s longest running comedy room. Comedy Club @ The Civic Pub has quickly become Canberra’s most popular comedy venue, selling out regularly since it hit the scene in 2009. Comedy Club features the best local and national stand-up comedians each month, and has proven to be a huge hit with audiences. Situated in the city, patrons are able to eat at the popular bistro downstairs before enjoying drinks up pub prices upstairs. Tickets from $15 per show.

“I had a ball. Great crowd, great room. I can’t wait to get back there.” – Ryan, Melbourne

When: 1st Wednesday of the Month, 8pm

Canberra’s oldest and most prestigious open mic. With a genuine bohemian feel, ‘The Front’, as it is affectionately known, offers a casual night of comedy fun where you never know what you might see. Sit among the couches and laugh as seasoned comedians perform alongside newcomers to the art in a cosy, anything goes environment. Entry is free.

“It’s just a fabulous place to have a drink and laugh.” – Tyrone

“Very casual, very fun…I love how laidback it is.” – Gaz

When: 2nd Tuesday of the Month, 8pm

A classy bar in the heart of Manuka. Enjoy a meal at one of the nearby fine restaurants before heading across to Polit Bar for some smooth cocktails and high-class laughs. Ticket prices variable.

While not run by Comedy ACT, Canberra Comedy Festival is run by comedians and show producers most of whom are affiliated with Comedy ACT. This young yet hugely popular festival has been bringing internationally and nationally recognised comedians including Stephen K. Amos, Peter Helliar, Akmal, Cal Wilson and The Umbilical Brothers to Canberra since 2013.

When: March each year. 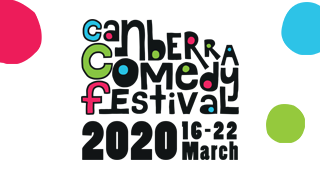 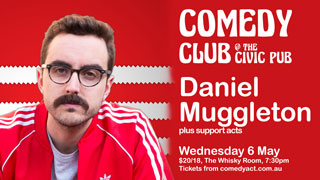